It was the former Danish Prime Minister and NATO Secretary General Anders Fogh Rasmussen who opened the 2nd Copenhagen Democracy Summit in the Royal Theater of the Danish capital on June 27th. The Copenhagen Democray Summit, held for the first time in the previous year on the initiative of Rasmussen, is “dedicated to strengthening the resolve of the world’s democracies by providing a high-level strategic forum exclusively focused on the cause of democracy.” Many high-ranking guests took part: many US Congress members were present, the Taiwanese Foreign Minister held a speech, and there were many NGO representatives among the participants.

In his welcome address, Anders Fogh Rasmussen set the framework: on a global scale, democracy is under pressure – but it could prevail if all democrats stand together. There was a frontal attack against Rasmussen’s “favorite enemy” from his time at NATO – Vladimir Putin – and a side blow against the second most important enemy of democracy: China.

In a way, the distinction between “good democracies” and “evil dictatorships” makes sense, as it points to the core of the current problems of the global democracy movement: autocratic rulers, illiberal democracies, and outright dictatorships are gaining ground – and there can be no doubt that it is especially China and Russia, but also the governments of the Philippines, Saudi Arabia, and some European countries, such as Turkey, Hungary, and Poland, that are trampling on or ignoring human rights, and that show little or no respect for democratic practices and standards or established multilateral mechanisms.

The moderator of one of the first expert debates on the anti-democratic activities of Russia and China (involving representatives of the International Republican Institute and the German Marshall Fund) summed up one of the dilemmas of the global democracy network: “Five to ten years ago, we would also have discussed possibilities to strengthen the democracy movement in China and Russia from within, asking ourselves how we could help NGOs to network. At present, however, we are only talking about means to fend off attacks rather than strengthening democracy movements.”

On the occasion of the event, a new edition of the Democracy Perception Index (DPI) was presented under the heading “Democracies are losing the hearts and minds of their citizens”. The DPI polled 125,000 people worldwide, claiming to have taken 75% of the world’s population and 75% of global GDP into account.

According to the Democracy Perception Index, a big majority (79%) of the global public thinks that it is important to have democracy. At the same time, however, many feel that they have no voice in politics and that their governments are not acting in their interests (51% and 58%, respectively).  In particular, they have little faith that their government is formed “by the people” to work “for the people”.

This public disillusionment is more common in democracies than in non-democracies. Almost two-thirds (64%) of the people living in democracies believe that their government “rarely” or “never” acts in the public interest.

The conference always showed momentum and focus when NGOs and representatives of civil society were allowed to speak. For example, Diana Moukalled, journalist and author from Lebanon, gave a strong account of the importance of support for the democracy movement at the beginning of the so-called Arab Spring, and how frustrating it was and still is that the world community has more or less lost interest.

Joyce Banda, former President of Malawi, was able to demonstrate the importance of worldwide networking and support based on her own life story. It was only through global networking and financial support from national governments and the United Nations that she was able to succeed in her political life and finally even hold the highest office in Malawi.

The weak point of the conference was the strong embracement of US perspectives: if there was any criticism of the United States and the difficult role of the country especially after the inauguration of Donald Trump and his share in causing the current crisis of multilateralism and democracy, it was primarily raised from the auditorium and not by official speakers. 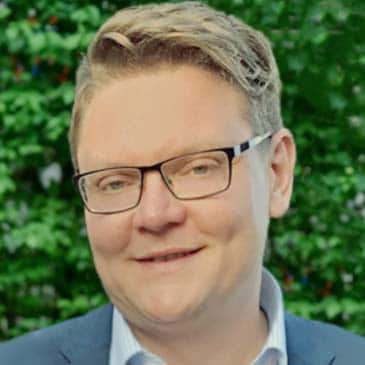 Jan Diedrichsen
Jan is chair of the Society for Threatened Peoples and a member of Democracy Without Borders in Germany.
If you like this article, consider making a donation
DONATE NOW