World federation and the Israel-Palestine conflict

As an Israeli citizen who is promoting the vision of a democratic world federation, I often encounter the following challenging question: “Your country holds millions of Palestinians under military rule, oppression and discrimination; shouldn’t you struggle to bring about real democracy at your local level first, and only then talk about the global level?”

My honest reply is that to the best of my understanding, the lack of democracy and rule of law at the global level is, in fact, the most fundamental underlying cause of this conflict, and that therefore it must be addressed with the highest priority if we are serious about ending it.

To understand why, it is useful to consider the rationale of the Zionist movement, whose turn to Palestine ignited the conflict. With all due respect to the ancient longing of religious Jews to return to the biblical «promised land», the main reason that so many (mostly secular) Jews turned to Zionism and immigrated to Palestine since the late 19th century, was the fact that as a minority in Europe they were too often prone to persecution and oppression. This experience led many of them believe the nationalist creed that only a nation-state of their own could guarantee their survival. Had there been – in the past or today – a world federation holding both the power and the democratic legitimacy to defend all humans in the world, it is unlikely that Zionism and many other national movements would have become so popular and powerful.

A world federation to defend all human beings

It is true that in a democratic world federation Israeli Jews would return to be just a small minority and would lack the legal sovereignty that they enjoy today. But that would not be a problem for them as rather than having to defend themselves they will be protected by the far stronger government that represents all humans. In such a world, all other religious, national or ethnic groupings would similarly turn into small minorities. When considering the nearly 8 billion of potential world citizens, we can see that even the largest groupings that we know – such as «Christians», «Muslims», «Chinese» or «Indian» – would be only large minorities: ~31%, ~24%, ~16%, ~15% respectively. And since these groupings are highly heterogeneous and divided internally, all people will belong to far smaller minorities, and that would be just fine.

Unlike nation-states, which by design are obsessed with maintaining a national majority in the country, in a global federation «the people» would be composed entirely of minorities. This inherent diversity of the population means that the only social contract that such a polity could be based on would be one that enshrines and protects the basic rights and freedoms of all people and their groups, through effective constitutional and institutional checks and balances and with a democratically elected world parliament at the center.

In such a federation, Jews and Palestinians alike will not be restricted from settling in any part of the Earth.

No land would belong exclusively to any group, and people would be free to live wherever they choose, as is customary within democratic federations.

The vision of a global welfare state

For those who fear that such global freedom of movement would open up the gates for a gigantic wave of global immigration from poor to rich countries, I would say that their fears are ill-founded. Just as national borders are indeed successful today at preventing such immigration, the divisions they create between national legal systems are even more successful at preventing national tax authorities from getting their hands on the wealth of the world’s super-rich. In a world federation, in contrast, whose tax authority would span every corner of the planet, there will be a gigantic wave of redistribution not only of political but also of financial power from the global super-rich to the global super-poor. In such a global «mixed economy» or «welfare state» the global poor will suddenly be able to make a decent living in local jobs, providing necessary services and infrastructures to their own communities. Having that option, it is clear that the vast majority will remain in their homelands with their loved ones, rather than tear themselves from their families, friends and cultures, as so many are forced to do today.

The question of priority

Coming back to the narrower question of Israel and Palestine, some people insist and rephrase their question as follows: “though a world federation is a noble vision to aspire to in the long run, they say, in the meantime the Palestinians are suffering enormously from atrocious injustices, and cannot wait for global democracy to emerge. The colonialist project of Zionism continues to deprive them of their basic human rights, in flagrant violation of international law, and it is our moral duty to help and protect them first.”

To explain the flaws in that argument, it is useful to start with a simple analogy: imagine an armed group that bursts into a conference hall and takes all the attendants as hostages. In our domestic national systems, we know it would take much less than 50 minutes before the place would be surrounded with police cars and special forces coming to liberate the captives. Yet in our anarchic international system, Palestinians can live under occupation for well over 50 years and no police force are rushing to help them.

There is no global authority to protect people

The lesson of this analogy is that while our natural reaction to Israel’s occupation is to condemn Israel and Zionism, the more basic problem is with the international system, that has no real mechanisms for protecting victims and restoring justice. For this reason anyone who really cares for humans in general, and the Palestinians in particular, cannot ignore this aspect of the problem, or postpone it until after the conflict has been resolved. This systemic problem can be addressed and must be addressed as a precondition, or at least alongside any effort to find a local or particular solution. Yet today it is mostly ignored.

Whether one thinks that the conflict should end by dividing the land into two nation-states, or by turning it into one democratic state, one must recognize the necessity of an external authority equipped with sufficient force – and democratic legitimacy – to intervene when necessary to enforce such a solution, and protect it. In the current international order such authority does not exist and it will surely not just «emerge» if we continue to postpone the discussion about it.

The nature of the UN and human rights

The United Nations clearly does not possess the necessary power for such intervention, as the budget of Israel’s ministry of defence alone is several times bigger than the combined budget of all the UN agencies. As the UN does not have any state power and cannot collect taxes from of the global rich and their corporations, it is completely dependent on the voluntary contributions of the richer member governments, who give very little.

But more importantly, the UN does not possess the democratic legitimacy to intervene, as rather than belonging democratically to the world’s nations it belongs exclusively to the governments who rule over them. It is this characteristic of the UN, more than anything else, which shows the greatest weakness of the movement for Palestinian independence: in today’s world there is nothing really unique about the fact that they are oppressed by a government that does not represent them. Openly oppressive governments are perfectly standard, both legally and normatively, in the current international order. One does not need to look far beyond Israel-Palestine to see this plague extending over most countries in the Middle East, across much of Africa and much of Asia.

So we should not be surprised by the experience of many decades, that has shown that repeating cliches about «violations of international law and human rights» did little to bring an end to the conflict. Thinking of «international law»: how can it be seriously called a «law» if no-one is responsible to enforce it? At the most, surely, it should be called only a «norm».

Human rights are a privilege of national citizenship

The term «human right» is similarly misleading and unhelpful. Unlike my Palestinian friend, I enjoy almost all the rights detailed in the 1948 «Universal Declaration of Human Rights». But what many observers miss about the true nature of these rights, is that I enjoy them not because I am a human but only because I live under the jurisdiction of a national government that gives me those rights. That difference is much more than semantic, and it means that what I enjoy, in fact, are not human rights but only national rights, or to be more precise: national privileges.

When understood this way, it flows that not I nor anyone else in the world enjoys human rights, and that therefore while many atrocities have surely occurred and continue to occur in the conflict, there havn’t been any «violations of human rights». One cannot violate something that does not exist. To truly institute human rights we need more than a declaration and more than national governments – we need a universal federal government that will be responsible and accountable for providing these rights to all human beings. Until then, and as long as the existing international order allows only national privileges and not any human rights, there is nothing surprising at the great support that nationalist parties enjoy.

It is too easy to direct the blame at this player or the other for following their narrow interests, but it is far more important to point to the lack of a global justice system that belongs to us all and protects us all. Our basic choice, in other words, is not between a one-state or a two-state solution for Israel and Palestine, but between a federal state system of the entire world, and two-hundred sovereign governments that will continue to divide us.

Realizing the vision of a world federation can be promoted in many ways, and one of the most promising is the creation of a Parliamentary Assembly at the UN that eventually could transform into a world parliament. Such an assembly, whose creation in legal terms is relatively easy as it does not require a UN charter reform, will bring together elected representatives from both coalition and opposition parties from many states. Following the example of the European Parliament, it can be expected that these representatives will form transnational groups who will push forward many other necessary reforms and further democratization at the global level. 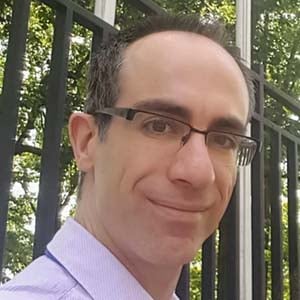 On the need of a democratic global government