Coronavirus and the need for global governance

As our lives and our societies are disrupted by the COVID-19 (Coronavirus) crisis, some weaknesses of our political systems and existing ways of organizing our societies are glaringly exposed. Consider for example the lack of universal healthcare in some countries, which now becomes very problematic, or the vulnerabilities created by the huge amount of air travel in the service of economic globalization. This situation is sad but at the same time also raises the hope for change: maybe we learn from this. Maybe this is the beginning of a transformation. Maybe we should take this as an opportunity to change things. The issue I want to address here concerns the lack of effective cooperation and coordination at a global level, or stronger: the lack of adequate global governance and the political institutions that can do this. It has become clear that faced with a pandemic of global proportions, it is highly ineffective and dangerous to leave policy to nation states. Viruses know no borders, and even if there is an understandable reaction of closing borders and retreating into one’s own territory, it does not make sense if only some countries do this and others don’t – or react much later, too late.

In the light of human rights and other universal principles and values, it also seems pertinently unfair that some citizens receive better protections than others, just because they happen to live in a country with a different policy (e.g. a policy that goes for “herd immunity”). As a matter of justice, the right thing to do would be to coordinate crisis response and, more generally, health care policies. If this was just a one-off issue and one that is only about health, we could leave at this: a call for a temporary global coordination in the face of COVID-19. Perhaps this problem could be solved by having an ad hoc supranational action enabled by existing international institutions, something which is unfortunately also lacking today but which one can at least hope for within the boundaries of the present setup. (Maybe next time, after already thousands of people died?)#

But, there are good reasons why we better opt for a permanent and supranational solution: this is not the only crisis we are facing. There is a much bigger global threat that did not go away just because we are not looking, mesmerized as we all are by the Corona crisis: the climate crisis. Many scientists and activist continue to remind us that time is running out. And there are other global challenges having to do with technologies, water, war, and so on – all of which could easily turn into a global crisis. Consider for example the dangers of using artificial intelligence for automated warfare.

My main argument is as powerful as it is simple: global problems need global responses. Such a global response is impossible if we don’t create the suitable political institutions at global level. Therefore, we need global governance and create the adequate supranational structures for this. You don’t have to be a philosopher to understand this. Do we really have to wait for things to get worse before we act? Or will petty nationalism once again get in the way to do what is reasonable for the sake of humans and humanity? Now any suggestion concerning supranational institutions for global governance have always met with a lot of resistance. Apart from straightforward nationalist reactions, there have been at least the following 3 objections.

First, people always bring up the issue of the danger of authoritarianism. This danger is real. But today it is mainly caused by nationalism. We see how right wing populism glides slowly into the direction of authoritarianism in countries such as Brazil, the US, and Hungary. Moreover, by itself the danger of authoritarianism is not a good argument against global governance as such, since it also exists at the level of the nation state. The challenge then, at national and supranational level, is to make sure that the political institutions are democratic and protect freedom. But it is hardly an argument against global governance as such.

Second, related to this objection is the idea that global governance means a world government. The worry is then that this will be a powerful and centralist government, which apart from posing the danger of authoritarianism, also pulls all the power towards itself at the expense of the power of nation states and other political levels. This worry is also genuine and legitimate, but can be defused by reminding ourselves that the model of the centralist nation state is not the only model for government, and that the state is not the only model for governance. For example, countries such as the US and Germany offer relatively successful federalist models of organizing the nation state. And I invite everyone to be creative and find an alternative for the state as the main political institution.

Third, some people may worry that global governance is difficult because of cultural difference, or that world governance would wipe out cultural difference, identity, and a sense of belonging. This concern is understandable but is again not very potent as an objection. The challenge to respect cultural difference and feelings of belonging and to find a common value basis for governance also exists at the level of the nation state, and if we look at international practice there are reasons to be optimistic: people have been able to gather around ideas such as human rights and other principles and values. The philosophical problems with regard to the idea of a global ethics should not be confused with the pragmatic challenges of bringing people together and the political reality of a world that already found ground for cooperation.

Moreover, it is exactly in times of crisis that we tend to find a basis for cooperation in the realization that “we are all in this together”. A crisis like climate change or COVID-19 makes us aware of our common interests, the importance of cooperation and the value of the common good, and a basic ontological feature of our world: relationality. We are related to one another and dependent upon one another, and everything is related to everything. Never before was it so clear how the wings of the butterfly can influence the weather at the other side of the world: your virus today will be my virus tomorrow, wherever you live and wherever you are from.

Actually, this realization of the need for cooperation on the basis of a feeling that “we are all in this together” already happened before. The main intergovernmental institution (not supranational) we have today, the United Nations, was created in 1945 to maintain peace and achieve more international (not supranational) cooperation. This did not happen only because some people believed in international cooperation. It happened in response of a major crisis at global level: World War II.

Today, we face new crises, global crises. One of them, the climate crisis, will have a major impact on the future of our societies and humanity. This is a good moment to push for the next step after internationality: global governance. If we do not take this historical opportunity, future generations will not forgive us. Unrestrained nationalism has already done enough damage. It’s time for change and the time is now.

This article was orginally published at www.e-ir.info under a CC BY-NC 4.0 creative commons license. It is republished here under the same terms. 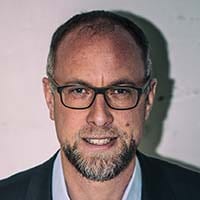 Mark Coeckelbergh
Mark Coeckelbergh is Professor of Media and Technology at the University of Vienna. He is an expert in ethics of AI and ethics of robotics.
If you like this article, consider making a donation
DONATE NOW