We need to proclaim humanity’s right to self-determination

From November 3-5, Milo Rau and the Institute for Political Murder (IIPM) convened a General Assembly at the theatre Schaubühne in Berlin as “a concept of an actual world parliament” in order to give a voice to all who are not represented and to debate “on where we stand as a global community and what needs to be done.”

Here’s the speech that I delivered at the opening session:

Millions of years from now, it will still be possible to trace our present industrial civilization in layers of rock. The spread of humanity is accompanied by a global extinction of species, which keeps accelerating. It will be noticed that many species will gradually disappear as fossils. What will appear in the rock instead are components of plastics and artificial radionuclides, which have been released since 1945 with the detonation of more than 2,000 atomic bombs.

The most important marker for the beginning of a new age, however, will be the exponential increase in CO2 concentration in drill core layers over the last 100 years. It is now the highest in four million years and continues to grow.

In the Anthropocene, humanity has become a community of fate and survival.

During the Holocene, environmental conditions were very stable and life-friendly for humans over a period of 14,000 years. In the new age of the Anthropocene, which geoscientists have proclaimed, human civilization has an impact on the Earth’s environmental and climate conditions as a whole. Global warming and other human-influenced factors can irrevocably cause the climate processes of our planet to tip into a life-hostile state. 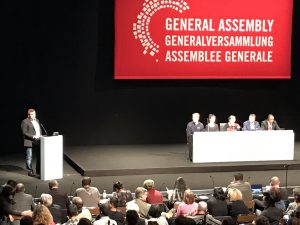 Humanity has become a community of fate. Planetary problems such as climate change, species extinction, land and ocean pollution or the persistent existence of thousands of nuclear weapons that can wipe out world civilization within 30 minutes are all issues that concern everyone.

The global consumer society and its consumption of resources are not sustainable and deeply unfair. Eight individuals possess more wealth than the poorest half of the world’s population, or 3.6 billion people. This poorest half is responsible for only 10 percent of global emissions, but is most severely affected by the effects of climate change.

An equal voice for all

If we are serious about human equality and fundamental human rights in any way whatsoever, then every citizen of the world must have an equal voice in solving humanity’s challenges.

The question is not why a world parliament should exist, but why it still does’nt

In 1919, the first democratically elected government of the new German Republic declared itself in favour of a world parliament within the framework of the League of Nations. Almost 100 years later, the question today is not why a world parliament should exist, but why it still wasn’t created!

The nation states and their intergovernmental organisations have proven to be incapable – and they prove it every day anew – of building a democratic, peaceful, just and sustainable world order. It’s time for a new global enlightenment. We must proclaim the right to self-determination of humanity.

We need a world parliament democratically elected by all citizens of the world so that humanity can take responsibility for itself, life on earth and for future generations. The role of the World Parliament is to ensure that the best possible well-being of all people and their common interest is guaranteed. It is an expression of the self-determination and sovereignty of humanity as a whole and an indispensable foundation of a legitimate world order.

A world parliament must have the competence to make binding decisions on issues that affect humanity as a whole.

We must support and defend the champions and advocates of democracy in the autocratic countries who oppose the despots and their crimes. We must make it clear to the beneficiaries of the current world system, the global corporations and their super-rich owners, that they cannot stand in the way of a world democracy without risking everything.

Mobilizing the potential of world citizens

The world’s population is much more advanced than their own national governments when it comes to global solutions. A majority of people in almost all countries and regions of the world also identify themselves as world citizens. They support stronger measures to combat climate change, they want nuclear weapons to be abolished, they are in favour of strengthening the United Nations, they are calling for human rights to be enforced and they believe in democracy. In order to achieve a world parliament, we must mobilise the potential of these people.

I am speaking today as a representative of Democracy Without Borders and I co-founded the international Campaign for a Parliament at the UN ten years ago. Our campaign is supported by hundreds of personalities from over 150 countries, including more than 1,500 democratically elected parliamentarians. We operate globally and we talk to governments, parliaments and other stakeholders to achieve parliamentary representation of the world’s population at the world level.

The General Assembly, which we are privileged to open today, is an important step towards exposing the undemocratic nature of the world order and emphasising the need for a global parliament. The storming of the Reichstag as a conclusion is an important symbol. The new German Federal Government and the newly elected Bundestag could and should play a pioneering role in the realisation of a cosmopolitan democracy.

In this spirit, I wish the General Assembly every success.

Andreas Bummel
Andreas Bummel is Executive Director of Democracy Without Borders and co-authored the book "A World Parliament: Governance and Democracy in the 21st Century"
Read more