Ahead of the Copenhagen Democracy Summit in 2021, the Alliance of Democracies Foundation and Latana, an online research company, published this year’s edition of the Democracy Perception Index (DPI). With a coverage of 53 countries, the survey is one of the largest annual assessments of this kind in the world.

In addition to shedding light on the perceived state of democracy during the COVID-19 pandemic, this fourth edition is complemented by original data measuring early signs of a “Biden effect” in world affairs and popular support of projects to achieve closer collaboration of democracies.

The perceived democratic deficit has increased

Current data reveal that a large majority of individuals (81%) considers democracy as “important” and a preferable model of governance for their country. Faith in democracy has therefore kept stable in the past years with significant scores registered even in “not free” or “partially free” countries such as China, Russia, Iran, Turkey or India.

However, only 53% of interviewees believe that their country is actually democratic (the score is 58% in countries labelled as “free”). The difference between the importance assigned to democracy and the level of satisfaction with the state of democracy in the respective countries measures the notion of a perceived democratic deficit.

According to this operationalization, the deficit gap has increased by 6 points since last year. With no country living up to citizens’ democratic expectations and with more and more people believing that their government mainly acts in the interest of a minority, the desire for more democracy has increased in almost all surveyed countries, democratic or not. 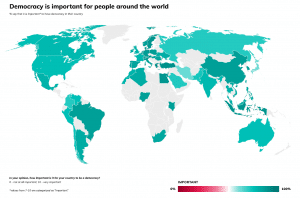 Perceived threats to democracy, global politics and a “Biden effect”

From among a selected list of factors holding potential negative effects on democracy, economic inequality is viewed by 64% of respondents as the biggest threat to democracy in their country. Moreover, this tendency is correlated with the perception that the government mainly acts in the interest of a minority. Economic inequality as a threat to democracy is directly followed by limits on free speech (53%), unfair or fraudulent elections (49%) or the influence of Big Tech companies (48%).

The 2021 Democracy Perception Index also shows that 42% of people around the world fear that external powers might interfere with domestic electoral processes. Anxiety about foreign interferences has increased in almost all surveyed countries since last year.

According to the survey, most people (44%) in virtually all countries fear external interference from the US more than they do with regard to China (38%) or Russia (28%). Nevertheless, with the appointment of Joe Biden as US president, the perception of the US’s global influence on democracy has evolved positively since the Spring of 2020.

Closer collaboration of democracies and management of the pandemic

On global average, about half of the respondents declared to be supportive of initiatives proposed by the UK or the Biden administration in order to achieve closer collaboration of democracies.

“The positive support for an Alliance of Democracies, whether the UK’s D10 initiative or President Biden’s Summit for Democracy, shows that people want more cooperation to push back against the autocrats. Leaders should take note of these perceptions and act upon them”, said Anders Fogh Rasmussen, former Secretary-General of NATO and chair of the Alliance of Democracies Foundation.

Finally, the Democracy Perception Index 2021 offers a measure of people’s assessment of their government’s response to the COVID-19 pandemic. Satisfaction has dropped from 70% (2020) to 58% (2021) globally, with noticeable decreases in Latin-America, Europe and democracies generally.

In comparison with the 2020 DPI, this year’s results show that democracies are failing to meet the expectations of their constituencies on how the pandemic should be handled. Crossing satisfaction rates with COVID-19 deaths per capita in surveyed countries, the study indicates that dissatisfaction is correlated with an objective bad handling of the pandemic by democratic governments.

Results are based on a sample of more than 53,000 respondents from 53 countries, accounting for more than 75% of the world population. Interviews were carried out digitally between February 24 and April 14, 2021.

Matteo Gorgoni
Matteo Gorgoni graduated in philosophy, linguistics and political science from Lausanne University. He previously interned with the European Parliament and the UN Office at Geneva. In addition to his voluntary commitment with Democracy Without Borders, he is also a member of the Young World Federalists, the Union of European Federalists and the Italian Democratic Party.
Share on email
Share on facebook
Share on twitter
Related