2019, a politically turbulent and eventful year, now lies behind us. Around the globe, millions of young people took a stand on the climate crisis, engaging in protests against aimless policies, the neglect of science and the rights and interests of future generations. Given the fact that we are talking about an issue threatening no less than the existence of human civilization, this is great.

However, the climate debate also revealed that a solution of the challenges of our time cannot be limited to the reduction of greenhouse gas emissions. In order to establish a decarbonized world order based on justice, in which all people can coexist peacefully and enjoy the same rights, we need a whole raft of measures – small and big, revolutionary and long overdue, from local to global.

We made a plan – and wrote a book

As political decision-makers, – generally unopposed by older generations – have failed to present a plan capable of tackling problems that have been well known for decades, we decided to develop one in a book published last November. We, that’s eight young activists living in Germany, all engaged in different initiatives, organisations or political parties united through the Youth Council of the Berlin-based Generationenstiftung, a lobby for future generations.

Our plan embraces ten thematic areas that are all intertwined. We address, for example, not only the climate crisis and the imminent ecological meltdown, but issues including the economic system, the future of work, democracy, human rights and digitalisation. Alongside a critical analysis of the status quo in each topic area, the book contains 100 measures we propose should urgently be taken. This plan did not just appear out of thin air. Most of the ideas have been developed and elaborated by others before us, and the entire plan was discussed and coordinated with experts on each issue.

Democracy must be reformed – at all levels

One of the central findings we discovered was that the solution of a wide range of problems is currently blocked by a lack of adequate democratic structures. This begins on a regional or national level as, for instance, in Germany alone, 13 million people are excluded from the right to vote just because they are younger than 18. How then can we ensure that the interests of young people are represented in politics? But as the climate and environmental crisis, human rights violations in supply chains, migration flows, and the “hunger for data” of large corporations – just to mention a few of the challenges of the 21st century – are transnational in nature, democracy must not stop at national borders.

It is clear that there is a need for a transformation of global governance structures to effectively address these developments and set a strong framework for a collectively agreed direction for the planet. A look at the reality of international politics demonstrates that the current approach isn’t working. Besides the fact that institutions like the G20 have never been democratically legitimized at all, they also simply fail to achieve the justice they claim to ensure. It is the United Nations that should be representing the interests of the world population. However, even the UN has been unable to resolve global injustice, poverty and the climate crisis over many decades. This comes as no surprise, as the organisation lacks democratic legitimacy and the power to enforce its decisions.

On the path to global democracy

Giving power to the people, within and beyond the nation-state – this is how our chapter on global democracy can be summed up. A World Citizens’ Initiative allows direct political participation for world citizens in global politics. People from around the world can join forces and launch initiatives. Once enough support for a specific concern is raised, the UN must address it.

However, this is only the first step. Institutional changes are long overdue. These include a reform of the security council, and more powers for the UN. The goal is a democratically elected world parliament. Together with the General Assembly, it would have the authority to pass world law – democratically legitimized and enforceable.  A global constitution would guarantee universal and inalienable rights. Even though states would forfeit sovereignty over global issues (which they cannot manage anyway), they would retain sovereignty over national issues (which they can manage). With this form of governance, the global challenges of the 21st century could finally be solved globally, with the participation of those affected – that is, everyone.

What other plans exist?

People tend to dismiss the demand for a world parliament proposed in our book as unrealistic. It is true that such sweeping reform will not be realised overnight but first steps such as a UN Parliamentary Assembly are possible today. Furthermore, our plan is not written in stone. We want people to disagree and present their own plans, as long as they will lead to the same non-negotiable goal: a sustainable and fairer world. However, to our knowledge, there are no other viable plans that reflect and balance all people’s interests without restructuring global governance. The present system has reached its limits. 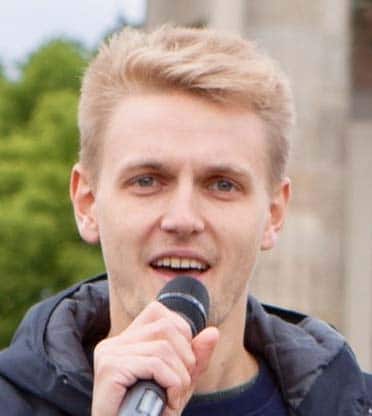 Jakob Nehls
Jakob Nehls, born 1994, studies Human Rights and Politics in London. In the context of his work for Amnesty International he defends the human rights interests of the young generation.
If you like this article, consider making a donation
DONATE NOW