For the third time the International Institute for Democracy and Electoral Assistance (International IDEA) has published what they call “a global health check of democracy” in the form of their annual report on “The Global State of Democracy” (GSoD).

According to the new study more than half of the countries in the world – 62 per cent, or 97 countries – are now democratic compared to only 26 per cent in 1975. The number of democracies has risen from 90 in 2008 to 97 in 2018. In addition, the report points out that popular demands for democracy continue to be strong even in countries that have never experienced democracy (see also this piece on recent mass protests).

Many reasons for concern, some for hope

However, in line with last year’s report (covered here), the authors find that democracy is facing severe challenges across the globe across all dimensions mapped by the research project: representative government, fundamental rights, checks on government, impartial administration and participatory engagement.

What stands out as particularly worrisome is the observation that modern democratic backsliding is occurring from within the democratic system, at the hands of democratically elected majorities. The primary concern is thus with the non-electoral pillars of democracy such as civic space and checks and balances. All-too familiar terms such as populism, hate speech, polarization, disinformation and civic disenchantment serve as unwelcome leitmotifs throughout this year’s IDEA report. A new area of concern is the persistence of economically powerful non-democratic regimes that offer an exportable alternative system of governance, challenging democracy’s monopoly on legitimacy. 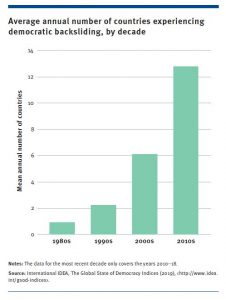 Nonetheless, the authors follow IDEA tradition in taking great care to also highlight reasons for optimism. Next to the increasing number of democratic countries and transitions in unexpected areas, what emerges as global democracy’s most important asset and hope are those citizens around the world who demand democracy and unite to protect it.

While Europe and North America remain the regions with the highest democratic performance both have faced serious challenges to the quality of democracy. While the USA have seen declines in civil liberties such as freedom of religion, many European countries struggle to mitigate the eroding effects of extremist parties and ideologies. The fact that even the longest-lasting and most established democracies have become vulnerable to democratic backsliding is considered an important warning sign.

Latin America and the Caribbean come in third place. The regional average, however, hides striking differences between countries that include some of the highest performing democracies worldwide (e.g. Costa Rica), as well as severe cases of democratic backsliding and even breakdown (Venezuela). The analysis of current strains on democratic governance in Latin America serves as an important reminder that increased migration as fuel for anti-democratic populism plays an important role across regions.

Both Africa and Asia and the Pacific can be described as the two most dynamic regions in terms of democratic development and as the only ones that still witness democratic advances – notably Malaysia’s transition to democracy in 2018. At the same time, a number of countries, including newly advanced ones, face democratic weakness and fragility and some experience severe backsliding (e.g. India). Finally, the Middle East is retains its role as global democracy’s problem child. It is the region in the world that suffers the greatest democratic weakness and has the highest share of persisting non-democracies.

This year’s report leverages the GSoD dataset to also evaluate progress on the United Nations’ 2030 Agenda for Sustainable Development, specifically on Sustainable Development Goals (SDGs) 5 (gender equality) and 16 (peace, justice and strong institutions). Unfortunately, the picture that this section paints is equally somber. For SDG 16, of 18 relevant indicators 12 have seen significant overall decline with only five recording progress and one stagnating. Meanwhile, efforts to achieve gender equality require serious reworking lest gender parity in parliaments will not be reached until 2065.

The upside to the findings related to SDG progress concerns democracy. While democratic regimes often fail to live up to their citizens’ expectations, they still perform much better when it comes to creating the conditions necessary for sustainable development and achieving SDGs. Hence, the authors consider the central message of their analysis that, despite its shortcomings, democracy remains without viable alternative.

But democratic regimes around the world need improvement to revive the democratic promise. The IDEA report therefore not only seeks to provide empirical evidence, but, building on more than 20 years of experience in technical assistance in democratic reform, also drafts a first set of possible approaches for solving democracy’s greatest challenges.

For each region, the authors identify priority countries and areas for reform along with good-practice countries for regional learning. Often, policy recommendations remain broad and mostly aim at identifying focus fields, but sometimes the authors also suggest specific policies for implementation, such as the introduction of public subsidies to political parties in Asia and the Pacific to combat corruption.

IDEA’s health check of global democracy reveals a multitude of symptoms indicating democracy’s precarious situation around the world. At the same time, it provides reasons for hope in showing that the desire for democracy and the willingness to stand up to demand and protect it is unbroken across civil societies.

Marie Becker
Marie completed her Bachelor's degree in Government at Harvard University in the United States and is now studying in the MA Euromasters Program for Contemporary European Studies at the University of Bath in England. She is a member of Democracy Without Borders.
Read more