Democracy and liberal principles are enshrined in documents like the Universal Declaration of Human Rights and the International Covenant on Civil and Political Rights. At the UN’s 75th anniversary two years ago, heads of state and government affirmed they will “continue to promote respect for democracy and human rights and to enhance democratic governance and the rule of law by strengthening transparent and accountable governance and independent judicial institutions.”

Autocrats and authoritarianism nonetheless are on the march. Accountable, transparent, inclusive, and representative governance, undergirded by civil liberties and the rule of law, cannot be taken for granted. Supporting and defending democracy at home and abroad is a defining challenge of our time.

But some myths have formed around democracy and democracy support – myths that threaten to benefit democracy’s adversaries, and corrode the confidence and resilience of democracy’s defenders.

Myth 1: Democracy is in decline

Freedom House, the Economist, and Sweden’s V-Dem Institute report annually that national measures of democratic health have declined steadily over the past two decades. Economic inequality, corruption, and poor government performance are among the factors that are increasing popular frustration and eroding confidence in democratic governance.

But the boundless sacrifice and resilience of people in Ukraine, Burma, Hong Kong, Belarus, Sudan, Nicaragua, Cuba and countless other places to defend their freedom and rights in the face of often brutal violence reflect the continued viability and power of the democratic idea.

What is evident is that people seek not less democracy but better democracy. What they want are governments that are less corrupt, more responsive, more transparent and accountable, more institutionalized under rule of law, and public-minded, not more opaque, more brutal, more self-interested, and more autocratic.

Understanding that democracy is not in decline as a desired goal but rather underperforming and under attack is essential to develop the necessary constructive response.

Elections are critical processes within a democratic system, particularly in democratic transitions. They are the ultimate moment of political accountability, when the people’s voice is heard most clearly and powerfully concerning their preference on the direction of national affairs.

And like a good physical exam, they are moments when the democratic health of the body politic – political parties, civil society, the media, and government agencies alike – is tested and exercised to their fullest extent.

Nonetheless, free and fair elections alone are not sufficient to achieving democracy. In a political system where sovereignty resides in the people, the people’s voices must be heard and their interests respected through democratic processes and institutions on a consistent basis, beyond election day.

Transparency, accountability, inclusion of all equally, and rule of law must become embedded into the national fabric, as must a culture of conversation, cooperation, toleration of differences, and compromise if democracy is to succeed.

In the past, too many governments and aid agencies have viewed democratic transitions through the lens of elections, often declaring democratic success based on a single result. But those in the democracy support field know well that democracy is never achieved through a single election or moment in time. Cultural conditions, deep-seated mindsets, and underlying political dynamics do not change in a day or even a year.

Myth 3: Democracy support work is a form of cultural imperialism

While it is widely accepted that certain core principles are essential to any democracy, there is no single democratic model. As practiced for nearly four decades, democracy support is a global enterprise in which a diverse array of countries may share lessons learned from their own democratic experience with nascent democracies struggling to get their footing.

More than 80 percent of the National Democratic Institute’s more than 50 country offices, for instance, are led by non-Americans, with country teams comprised mostly of local citizens who intimately understand local context and culture intimately, and are dedicated to their nation’s democratic future. The focus is on partnership and experience sharing, not “lectures,” that involve government officials and citizens alike, and address the nuts and bolts of democratic organization and practice.

The work is done transparently and without judgment, with the understanding that democracy is not easy, forever a work in progress, but benefits from international solidarity and support.

The Iraq war poisoned many people’s perspectives on this work. But those who do democracy support know that to truly take root, democracy cannot be forced at the barrel of a gun, but be home grown and nourished in local soil over time.

Myth 4: The US needs to get its own house in order first

It is a fair point that the state of U.S. democracy has historic flaws, even failings, and is presently facing challenges that not only undermine U.S. security and democratic credibility but also serve as a headwind to international efforts to support democracy worldwide. The United States, nonetheless, has long served as a beacon for countless people around the world seeking freedom and democracy in their own countries, and its current challenges demonstrate the truism that democracy is forever a work in progress.

Democratic activists around the world are not waiting for the United States to gets its house in order before seeking dignity and democratic rights for themselves. They continue to welcome the support and assistance of others, including the United States and U.S. NGOs.  If anything, they seek international democratic solidarity more than ever.

Americans (and others) who provide such support do so in a spirit of humility and partnership, understanding that no democracy has all the answers or is perfect. Sharing experiences means sharing successes and failures so lessons may be learned. By observing the successful experiences of other democracies we may be inspired in turn to find ways to regenerate our own.

Failing to support those requesting democratic support and assistance in fact would be the ultimate example of cultural arrogance and narcissism, and serve only to embolden democracy’s adversaries against our own values and interests.

Democracy has proven in study after study to result in better national health, security, peace and development outcomes, among other benefits. One would think then that it would be considered a strategic priority, integrated into the fabric of every aspect of nations’ foreign policy.

Yet despite rhetorical support, many policymakers and so-called “realists” continue to relegate democracy to the “nice-to-have” category.

But ignoring the practical impact of democratic norms on global peace, security and development, and the growing force of popular attitudes in the highly networked, citizen-empowered 21st century, is willful strategic blindness.

It is even more important as nations such as China, Russia and Iran increasingly promote their values and vision to shape a world safe for autocracy.  These states understand the stakes for themselves of the democratic model, and are unapologetic in aggressively advancing their goals and interests. Democratic nations must do the same, with similar confidence.

Empowering citizens to fight corruption, demand justice, ensure government transparency and accountability, and defend their political, economic and social rights can serve as a force multiplier against the global illiberal tide both within individual nations and the international system as a whole.

Americans and people across the world need to avoid succumbing to the false narrative that equates democracy support work with the malign efforts of Russia and others to intervene in domestic politics around the world.

There is a fundamental difference between the transparent efforts of democratic practitioners to support credible elections, free expression, accountable governance, and civic unity, and the shadowy efforts of ill-intentioned state- and non-state actors to undermine the stability and integrity of democratic processes and inclusive societies worldwide.

The former (co-)operates in good faith at the invitation of host countries; the latter operates opaquely and subversively without license or constructive intent.  The former promotes due process and is agnostic on policy or electoral outcomes; the latter subverts political processes and seeks self-interested outcomes. As former NDI President Ken Wollack has commented, it’s the difference between offering medicine and administering poison.

It is not surprising that autocrats seek to conflate the two activities given the danger democracy poses to their global power and influence. But no one should be fooled by autocrats’ continued efforts to distract, deflect and confuse to promote their malign self-interest.

Ultimately, the biggest danger to a more free and democratic world could be a toxic combination of complacency and fatalism, and the lingering myths that support them. 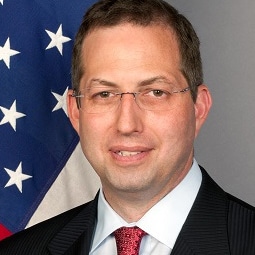 Derek Mitchell
Derek Mitchell is President of the National Democratic Institute in Washington D.C. Among other things, he previously served as U.S. Ambassador to the Republic of the Union of Myanmar (Burma).
Related

According to the UN’s chief, the world is in a state of emergency due to numerous intertwined crises and a failure of global governance. A new book titled Global Democracy: The…
Oded Gilad and Dena Freeman | 17.11.2022
Global Order | Opinion

The UN climate conference taking place in Egypt this week is an exercise in organized hypocrisy. One of the most striking images from the popular Science Fiction TV series The…
Austin G. Mackell | 07.11.2022
UN Reform

“The Bretton Woods institutions,” said Mia Mottley, the Prime Minister of Barbados, at this year’s UN General Debate, “no longer serve the purpose in the 21st century that they served…
Valentin Lang | 03.11.2022