The Young World Federalists (YWF) organized several events around the world to celebrate the 2022 Week for World Parliament which was held in October. These events brought young people together to explore global issues and world federalist ideas like global democracy, subsidiarity, and world citizenship.

In four time zones across the globe, YWF members, volunteers, and supporters highlighted global issues that matter most to them such as vaccine inequality, economic and technological progress, and democratic backsliding. World federalist ideas and campaigns such as United Nations reform, regionalization, democratic unity, and grassroots global democracy were discussed in-depth.

The Indian associate chapter of YWF, the Global Federal League, organized a zoom meet-up open to the general public. Titled „Anjuman-E-Aman“, the event was characterized by intense discussions on the prospects of global governance and the role of the youth in the movement to give humanity a voice in global affairs.

YWF East Africa organized an event in Nairobi on “The prospects and challenges of green transition for sustainable development in the East African Community.“ The event brought together young people, civil society organizations, and experts to discuss issues relating to regional economic integration and green energy.  The event centred on a model United Nations General Assembly meeting, with four committees for participants to choose from: Green and clean energy, opportunities for smart agriculture, sustainable blue economy, and a circular economy in manufacturing.

Young World Federalists in the United States met in New York City to learn and interact with an impressive lineup of speakers from civil society and academia. The focus of this event was how world federalism can help overcome conflict and build lasting peace. Several pathways to achieving a world federation alongside relevant opportunities to push them forward were discussed, specifically the 2024 United Nations Summit for the Future.

In Brussels, YWFers met over two days to hear from high-level speakers from the European Union and United Nations, as well as researchers and activists in the movement. The discussion focused on humanitarian aid and global health with an eye on how global bodies can be reformed to improve these topics.

These events introduced new audiences to the world federalist cause and helped to draw attention to the flawed nature of the current nation-state-centred system of global governance. By bringing global issues and world federalism to the attention of people outside the movement, YWF sees events like the Week for World Parliament as critical to achieving its mission of building support for world federalism. Read more about the events here. 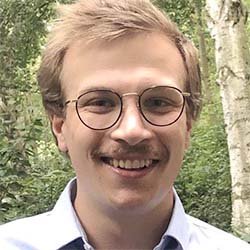 Eston McKeague
Eston McKeague is the President of the Young World Federalists and a member of the board of Citizens for Global Solutions in the United States.
Weitere Posts

The possible creation of a new mandate for a UN Special Rapporteur on Democracy was discussed by a group of experts from civil society organisations, think tanks, international institutions and academia.
DWB | 24.01.2023
UN Reform | UNPA

Reforming the United Nations and global governance was a subject at events in Brussels, Berlin, Madrid and Rennes in Europe as well as in Lucknow, India, in the past weeks….
DWB | 13.12.2022
Democracy

On November 30th 2022, the Stockholm-based International Institute for Democracy and Electoral Assistance (International IDEA) published their newest report on the Global State of Democracy, outlining a continual decline of…
Maartje Mensink | 05.12.2022