Reimagining Democracy: What if votes were a crypto-currency?

As trust in the political system seems to be on decline in many democracies across the world, it is time to envision new ideas to reinvigorate and strengthen democracy in radical ways. In common perception, democracy is associated with elections, voting, presidents and prime ministers. However, these are all tools to realize one particular dimension of democracy — a representative democracy.

The institution of representative democracy is a severely limited realization of democratic principles.

First, citizen representation is extremely limited. The number of individuals whose preference an elected representative is supposed to represent is so large as to be essentially meaningless. The problem is exacerbated in a rapidly urbanizing world with increasing population densities but without a corresponding increase in the number of representatives. Is it realistic to expect that a single individual would be able to represent the preferences of large and diverse communities?

Third, citizen cognition is not leveraged. The current model where participation is limited to choosing representatives every few years does not engage the intelligence of citizens in solving societal challenges. Instead, it treats citizens as consumers, offering them a simple menu card to choose their favorite representatives from.

What would happen if we think of votes as being a currency? Let’s call such a voting currency ’ GovCoin’. In today’s representative democracy,

These design choices of representative democracy were well suited for the time when they were designed. But are they still useful considering today’s technology?

Reconsidering the design choices of democracy

What if we reconsider the design choices of democracy?

What would be the impact of these design choices?

By increasing the supply of GovCoins, we inject liquidity into the system so that information (about citizens’ preferences and beliefs) can flow more fluidly. This increases the participation potential of citizens in governance. Rather than limiting participation to once every 4–5 years, citizens, in principle, can participate as much and as often as their GovCoin supply allows.

By enabling citizens to transfer GovCoins to anyone, we realize a form of liquid democracy where citizens can delegate influence to others whose judgement they trust. The default option of participation changes from ‘opt out’ to ‘opt in’ — every citizen can receive GovCoins from every other citizen. We evolve from a binary system to a continuous spectrum where GovCoin ‘wealth’ is a measure of social capital.

With GovCoins we can realize direct democracy

By enabling citizens to transfer GovCoins directly to a policy decision, we realize a form of direct democracy where citizens can express their preferences (and the strength of their preferences) on an issue directly.

By allowing citizens to accumulate GovCoins, we allow them to participate when they want. If I feel strongly about an issue, I can spend my GovCoins and influence this decision; if I am indifferent about an issue, I hold on to my GovCoins so that I can have a larger influence in future decisions. A small negative interest rate on GovCoins may still be needed to ensure that (i) citizens do not hoard the currency and (ii) to ensure that net influence of any individual is finite and time bounded.

Given today’s technology, realizing democracy with new design choices is no longer a pipe dream. A key enabling technology is blockchains which allow the creation of new currencies, among other things. At koinearth we are developing these solutions using a combination of blockchains, mechanism design & machine learning. Blockchain enables a secure, trusted ledger which can hold a record of account balances. This technology enables the algorithmic creation, allocation & destruction of a voting currency like GovCoins and thus has an immediate application as a secure and trusted technological backbone of election systems.

Blockchains are a key enabling technology

Algorithm creation means a fixed and known approach to how many GovCoins will be created, how frequently and when they will be created. Since the algorithm is implemented on a secure and trusted ledger the creation roadmap is fixed and cannot be manipulated.

Algorithmic allocation means that the rules of who will be allocated new GovCoins are configurable and, once configured, are fixed and known. In accordance with the democratic principle of equal opportunity, the scheme may be ‘1 GovCoin for 1 Citizen every 30 days’. The maintenance of this currency (transfer, individual balance) are built-in functionalities of the blockchain ledger which enables transfer of GovCoins among participants and to public projects or issues.

The algorithmic destruction of currency can be realized using a negative interest rate where GovCoins lose their value over time — a scheme like this allows citizens to accumulate GovCoins but discourages long term accumulation. The exact form of decay is fixed and known once the algorithm is deployed on the blockchain. This is an important piece of the puzzle which can ensure governance continuity while still encouraging active citizen participation.

GovCoins could be used to implement global democracy

If we interpret votes as a currency, the fundamental question comes up about whether it should be allowed to exchange GovCoins for other currencies (e.g. US$). Selling votes is an unacceptable practice in democracies and punishable by law. With votes interpreted as currency, it may be interesting to revisit even such traditional design choices — as controversial as it may be.

Finally, GovCoins and the underlying technology described here could be scaled up to implementing democracy at the global scale, allowing citizens to take influence on global decisions. 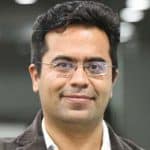