The creation of a UN Parliamentary Assembly as an initial step towards a world parliament is a key goal of Democracy Without Borders. This study examines the proposal and presents official recommendations. 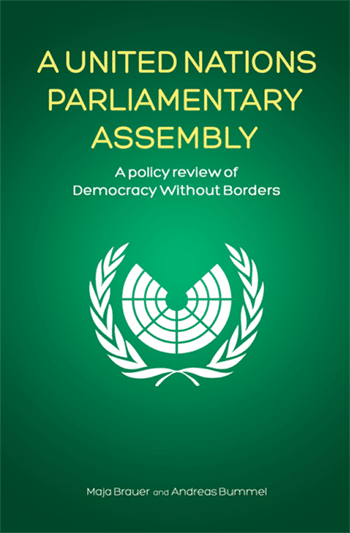 Paperback and hardcover editions can be purchased at all major online bookstores.

The 75th anniversary of the UN coincides with a dramatic global health crisis caused by the coronavirus pandemic and exacerbated by an incoherent, slow and insufficient global response. This is another symptom of an underlying crisis of global governance. The traditional intergovernmental approach to global challenges is failing. Global warming is an example: action over the last thirty years has been ineffective. Scientists tell us that not much time is left, if any, to prevent a runaway climate crisis.

The root cause of this ineffective governance is a scale mismatch between a political order based on nation-states and issues demanding decisive planetary action. What is needed is a new vision of a democratic world order that is based on shared global sovereignty for global issues. In the current context of nationalist populism, geopolitical tensions, and rising authoritarianism, the goal of a new UN, based on supranational global decision-making with real authority, will not be realized overnight. Nonetheless, whilst it is true that the world is faced with many acute problems requiring immediate action, it would be a big mistake not to pursue long-term systemic change in parallel. Transformation of today’s dysfunctional global system is long overdue. We are convinced that setting up a UN Parliamentary Assembly represents the single most important step towards this.

The proposal of a UN Parliamentary Assembly as described in this study is pragmatic and achievable under current conditions. We envision a modest start that paves the way to incremental development, eventually leading to a transition of the assembly to a directly elected world parliament in connection with an overhaul of the UN and related institutions. The quicker this happens, the better. In the meantime, even in its initial stage, a UNPA has the potential to bring about powerful change.

“In this time of despair and confusion, this paper is a clear statement on the feasibility of a more sustainable, fair and democratic political structure to cope with the issues of a global world. The theoretical and practical aspects of a UN Parliamentary Assembly are analyzed and developed with precision and accuracy. It's a fundamental contribution to the politics of the 21st century.”
FERNANDO IGLESIASArgentine Deputy and President, World Federalist Movement
“A UN Parliamentary Assembly is an important pragmatic step that needs to be taken now. This assembly should pave the way for a global constitutional process and eventually transition into a real world parliament.”
DANIEL JOSITSCHSwiss Senator and Professor of Law
“The UN needs reforms and new mechanisms for more democratic and efficient decision-making. A Parliamentary Assembly would stimulate global solutions for global problems and better connect the UN with the citizens. This study shows how it can work.”
JO LEINENHonorary President, European Movement International; former State Minister for the Environment and former Member of the European Parliament
“This study includes important recommendations and reflections on how a UN Parliamentary Assembly can be implemented and evolve over time. This new assembly is necessary to improve the democratic character of the United Nations and global governance.”
LIVINGSTONE SEWANYANAUN Independent Expert on the promotion of a democratic and equitable international order
“This report illustrates that a UN Parliamentary Assembly can be crucial to achieve more inclusive global governance. I'm delighted to support this project.”
ACHYUTA SAMANTAMember of the Lok Sabha and founder, Kalinga Institute of Industrial Technology & Kalinga Institute of Social Sciences, India
“The vision of a world parliament is giving hope and direction. The UN needs a democratic body that can make global law to the benefit of all. This study is a key resource that explains how this can be put on track.”
Ivone SoaresMember of Parliament, Mozambique
“A United Nations Parliamentary Assembly is essential reading for all of those who have been studying or working for global democracy. In providing a road-map for the creation of the assembly, Brauer and Bummel remind us that setting the stage for a humane future is not only desirable but eminently feasible.”
Andrew StraussDean and Professor of Law, University of Dayton School of Law
“The 75th anniversary of the UN is a pivotal moment to push for inclusive people-centered multilateralism. The creation of a UN Parliamentary Assembly is one of our key demands. We welcome this contribution on how it can be implemented.”
Mandeep TiwanaChief Programmes Officer, CIVICUS
“At this bleak moment, what we need are a clear vision and hope for a sustainable and democratic global order that benefits all. These are found in this marvelous review.”
Takehiko UemuraProfessor, School of International Liberal Arts, Yokohama City University
“For the UN to deliver on the Agenda 2030 and address the many crises and challenges in the world today, stakeholders from each sector and from around the world will need to work together to unite their strengths. A UN Parliamentary Assembly may be crucial to lift their collaboration to a new level.”
Pera WellsFormer Secretary-General, World Federation of United Nations Associations 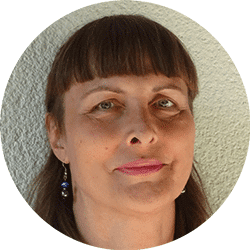 Maja Brauer
Maja is a co-founder and board member of Democracy Without Borders in Germany. She has studied philosophy and political sciences and completed a PhD on the subject of world federalism.